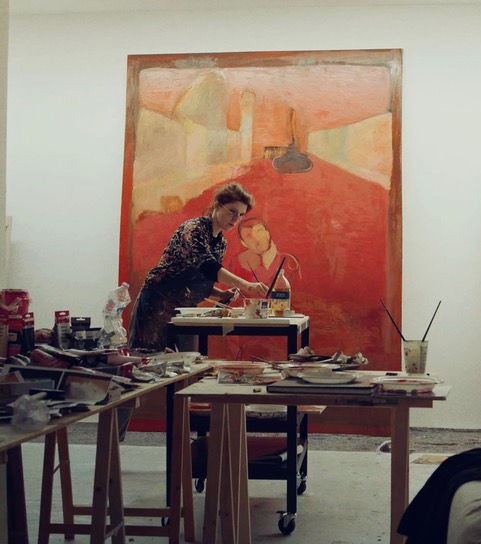 Fondazione Coppola presents its next exhibition, organized after the participation to the ArtVerona 2020 Level 0 prize, which saw the mutual commitment between the Foundation and the A plus A Gallery in Venice for the creation of a solo show of the artist Paola Angelini

The exhibition, scheduled from February 26th to June 26th 2022, is articulated along three floors of the Torrione, headquarters of Fondazione Coppola, and is entitled “Il tuffatore” (The Diver), an allusion to some images of the history of painting - belonging to remote antiquity as well as to the recent past - and a reference to a figure, that of the diver, whose presence in the image can be suspended in space and in an indefinite temporality and narrativity. Such is Paola Angelini's figuration: never fully narrative, but always evocative of potential stories.

The exhibition includes several large works made from 2016 to the present, highlighting some of the most emblematic aspects of the artist's poetics: an image that is born from the materiality of the painting. An image that comes only after a process of construction of the support that, through a full-bodied preparation/priming with plaster and rabbit glue, thickens and stiffens; a support/surface that gives life to a jagged landscape, within which the figures are called to gather and combine; the idea that this landscape is nourished by autobiographical and family memories and by a composed visionary spirit rooted in the tradition of twentieth-century Italian art with references that bring together Magic Realism, the Roman School, and the work of some sculptors much loved by the artist such as Pericle Fazzini.

So if Io a Roma (Me in Rome) shows a portrait of his father, What is Orange? Why, an Orange, just an Orange! is a mysterious double portrait that derives from a photo belonging to the family archive, which floats on a surface in which a dominant and vibrating tone seems to swallow and make emerge other hypotheses of figures around the main ones. And again: the figures of La storia che mi ha raccontato mio padre (The Story My Father Told Me) seem to emerge from an abstract and animated background, alluding to a story that cannot be recomposed in an organic way. Just as fragmentary is the landscape of figures and objects arranged around the table/banquet of Biography of a painting table, a scene vaguely Casorati-like, in which bodies, busts and faces, of different sizes and scales, are arranged around and on the table like objects of a still life.

Alongside the paintings, the exhibition will also present Facing fear with my hands, a video portrait directed by Davide Maldi that develops through the words of the artist and describes the studio days plonged in her home landscape, that of San Benedetto del Tronto, where Angelini was born and has chosen to live. 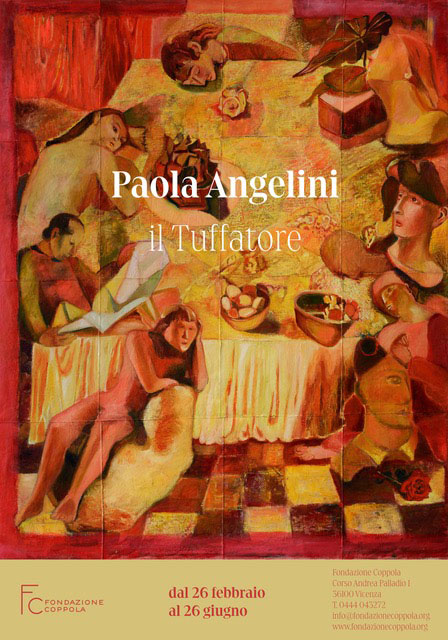 Access: € 5,00
Reduced admission for seniors (over 65 years): € 4,00
Free admission for minors under 18 years and accredited journalists with a valid press card.

Paola Angelini was born in San Benedetto del Tronto, Italy (1983) graduates from the Fine Arts Academy of Florence in 2010. In 2011 she attended the workshop of Visual Arts at IUAV University in Venice with Bjarne Melgaard, and in the same year she exhibited in the Norwegian Pavilion at the 54th Venice Biennale, in the exhibition entitled Baton Sinister. In 2017 obtained a Master in Fine Arts at KASK Conservatorium in Gent (BE). In 2014 and 2016 she participated at the Artist in Residency program at Nordic Artists’Centre Dale (NKD), Norway, and in the same year she’s been at the Fondazione Bevilacqua La Masa residency in Venice. She participated in several solo and group exhibitions in Italy and abroad, among others: Forme del tempo, Museo Palazzo Pretorio, Prato, 2017; La conquista dello spazio, Spazio K, Galleria Nazionale delle Marche, Urbino, 2017; Iconoclash, Museo di Castelvecchio, Verona, 2017; Rethinking Media, Brandstrup Galleri, Oslo, Norway, 2018 ; Babel of Bric a Bràc, BGE Gallery, Stavanger, Norway, 2019 ; Splendor Solis, Museo Cà Pesaro, Venice, 2021 ; Black Morning, Lyles&King gallery, New York, 2022 ; Il tuffatore, Fondazione Coppola, Vicenza, Italy.

Now she lives and works in San Benedetto del Tronto.