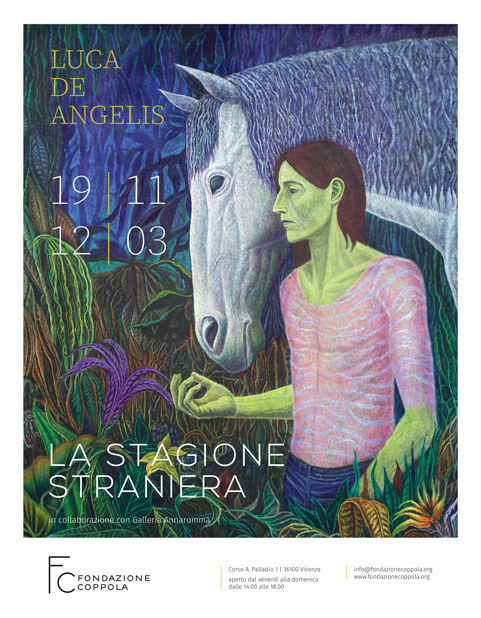 “La stagione straniera” (The foreign season) is the title of the exhibition with which Fondazione Coppola is pleased to present - following the Art Verona 2021 Level 0 prize and in collaboration with Annarumma Gallery - the works of Luca De Angelis, on view from November 19, 2022 to March 12, 2023. These are mostly small and medium-sized works that insist almost entirely on a single subject: landscape and figure, or the figure in the landscape, a classic theme of painting but transported by the artist to a dimension in which there is a deep, tactile and close dialogue between these two polarities.

What kind of landscape, then, is the one that appears in his paintings? A landscape that is always cramped, articulated around a very close foreground, sumptuously garish, exotic and unreal: of trees, plants, leaves and flowers that one could hardly name who are intertwined in sinuous and curvilinear gaits marked by dry contours on a thick surface, with the linen weave always in evidence. A kind of opulent pattern or warp that, by proliferating in every area of the surface, tends to deny the space depth, or to narrow the possibility of vision on even the smallest portions of the horizon or sky.

These "narrow" places, which tend to be close to two-dimensionality, are inhabited by figures that do not correspond to portraits of known people, but which the artist makes emerge by emanation from the landscape, bringing together in them images taken from fashion magazines and blogs and suggestions that refer to bodies and faces, with angular and sharp profiles, from paintings by beloved authors such as Felice Casorati and Ubaldo Oppi, to name just two examples.

Some figures are taken by surprise, and appear elusive, reluctant to an encounter with the viewer, showing themselves in profile or completely absorbed in a landscape that seems to belong only to them; others instead turn their eyes to the viewer, especially when - as in some paintings - they are depicted in cramped spaces (incidentally similar to the Torrione's interiors) against the backdrop of a window or fabric.

De Angelis' paintings, set up on the four floors of the Torrione in a progression from the bottom to the top, thus invite the viewer, through the nooks and crannies of the exhibition itinerary, to experience a profound otherness, a dimension of slowing down and estrangement - to which the title of the exhibition alludes - calling for a close and prolonged relationship with each of the subjects on display.

Access € 5,00
Reduced admission for seniors (over 65 years) € 4,00
Free admission for minors under 18 years and accredited journalists with a valid press card.

Luca De Angelis was born in San Benedetto del Tronto, Italy, in 1980. He graduated in Painting from the Academy of Fine Arts in Urbino and later from the Biennium of Visual Arts. In 2013 he received the first prize in the emerging art section of the Fondazione Francesco Fabbri Prize. In the same year he was invited by Andrea Bruciati to participate in the painting residency Painting Practices at Nogaredo al Torre (UD). In 2014 he was the winner of the Special Under 35 Award of the Combat Prize, and in the same year the Domus Foundation for Modern and Contemporary Art acquires the work "Pioneer" exhibited at the Artverona fair. Also in 2014 he presented Portrait of a man, a solo exhibition project at the Remont Gallery spaces in Belgrade. In 2016 the Galleria Civica of Modena acquired the drawing Untitled, and in the same year the Auditorium Parco della Musica in Rome hosted the solo exhibition project “Dropout” curated by Claudio Libero Pisano.
In 2018 he’s presented “Messinscena” at the Palazzo Ducale in Urbino, a solo exhibition curated by Umberto Palestini. In 2021 he won the ArtVerona Level 0 prize with Fondazione Coppola in Vicenza.
He currently lives and works in Milan.